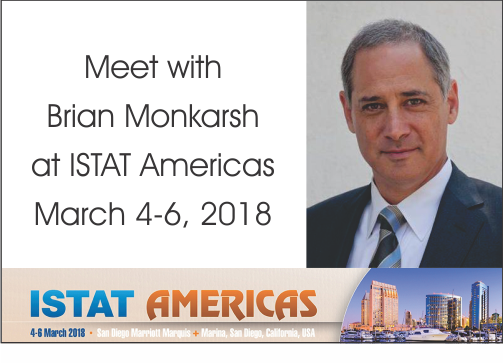 Aerlex Law Group’s Senior Counsel, Commercial Aircraft, Brian Monkarsh, who brings a wealth of experience and expertise in the fields of both business aircraft and commercial aircraft transactions, will be attending the International Society of Transport Aircraft Trading (“ISTAT”) Americas conference March 4-6 at the San Diego Marriott Marquis.

Prior to joining Aerlex in 2016, Mr. Monkarsh spent 18 years as in-house counsel for commercial aircraft manufacturers and leasing companies based in both Europe and the United States. He launched his aviation career in 1999 when he was appointed as Senior Counsel at aircraft manufacturer Avions de Transport Régional (ATR), a French-Italian joint venture of Aérospatiale (now Airbus Group) and Alenia Aeronautica (now Leonardo) based in Toulouse, France. Mr. Monkarsh went on to spend a decade with International Lease Finance Corporation (ILFC), one of the world’s leading aircraft leasing companies, climbing the ranks from Corporate Counsel to Senior Vice President & General Counsel. From 2005 to 2009, he was the lead attorney in all of the company’s equipment acquisitions, handling purchase contracts for more than 120 new Boeing and Airbus aircraft. He was also lead attorney in more than 100 equipment leases and in multiple litigation matters, including customer bankruptcies, collections, and equipment repossessions. Mr. Monkarsh later served as Vice President, Legal, at Aercap Holdings, today the world’s largest independent aircraft leasing company, based in Amsterdam, the Netherlands.

If you would like to meet with Brian Monkarsh at ISTAT or would like to consult him regarding a commercial or business aircraft transaction, please call 310-392-5200 or email him at bmonkarsh@aerlex.com.