Six new members were inducted into Living Legends, joining an elite assembly of 100 individuals whose notable achievements have driven aviation forward over the years. In addition, a group of outstanding contributors to the aviation community were honored with special awards.

Actor, pilot and Living Legend John Travolta, often called the “Official Ambassador of Aviation,” continued his tradition of hosting the black-tie dinner and ceremony at the Beverly Hilton Hotel and welcomed guests to a glittering event where honors were bestowed and the audience was delighted by tales of the recipients’ careers and adventures in aviation. 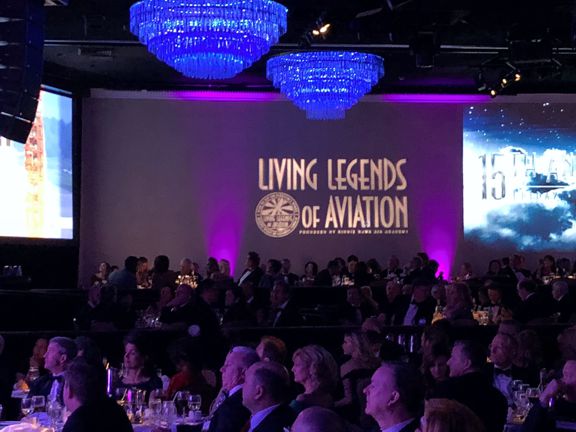 Two of the awards that are given out each year at the Legends ceremony were renamed this year in honor of past recipients. Going forward, the Aviation Entrepreneur of the Year Award will carry the name of Eren Ozman, owner and president of Sierra Nevada Corporation, and the Lifetime Aviation Entrepreneur Award now bears the name of Kenn Ricci, founder of Directional Aviation Capital and owner of various aviation enterprises including Flight Options, Flexjet and Sentient Jet. This year’s special awards went to:

The evening also included a “Flown West” video tribute to the life and achievements of astronaut and Living Legend Eugene Cernan, who died in January 2017.

The annual Living Legends of Aviation ceremony has become one of the most prestigious and exclusive events in the world of aviation. Famous figures from both Hollywood and the aviation industry fill the Beverly Hilton ballroom and make the Legends a star-studded event. The event raises money to support the work of the nonprofit Kiddie Hawk Air Academy, an educational program that seeks to inspire children to become the pilots of tomorrow.