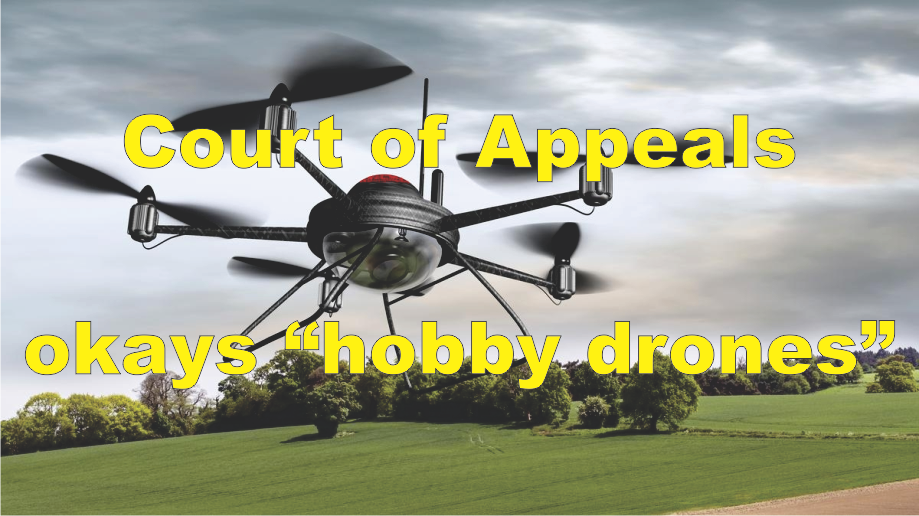 In a decision issued on Friday May 19, the U.S Court of Appeals for the D.C. Circuit overturned the FAA’s drone registration and operating rules as they apply to “model aircraft,” including drones. The suit was brought by John Taylor, a model aircraft operator in the Washington D.C. area. It challenged the FAA’s FAR Part 107, adopted in December 2015, which requires registration of all drones under 55 pounds and provides regulations for their operation and operator qualification. The rule makes no distinction between drones operated for commercial purposes and those operated for recreational or “hobby” purposes.

In overturning the portion of Part 107 that applied to model aircraft, the Court of Appeals relied primarily upon the explicit language of Section 336 of the FAA Modernization and Reform Act of 2012 (codified at 49 U.S.C. Section 40101) Specifically, Section 336(a) provides that the FAA “may not promulgate any rule or regulation regarding a model aircraft.” Indeed, this section merely codified a long-standing FAA “hands-off” policy towards model aircraft. Section 336(c) further provided that a model aircraft is an unmanned aircraft that is “flown for hobby or recreational purposes.”

Relying upon this clear statutory language, the Court of Appeals had little difficulty deciding that Part 107 is, indeed, a rule and that it applies impermissibly to model aircraft. Accordingly, the court ruled for Taylor on this issue.

In his lawsuit, Taylor also challenged the FAA’s adoption of Advisory Circular (AC) 91-57A. Among other things, this AC provided that model aircraft cannot be flown within the Flight Restricted Zone around Washington, DC and surrounding areas without specific authorization. The Court denied Taylor’s challenge of the AC because he had not appealed it within the applicable 60-day time limit and admitted he had no grounds for claiming excusable delay.

This ruling, of course, leaves intact the provisions of Part 107 as they apply to drones other than hobby aircraft. However, it leaves unanswered a number of important questions. First, what will the FAA do in reaction to this ruling? After all, the passengers and crew on an airliner brought down by a collision with a drone do not really care if it was a model aircraft or not. They would be just as dead either way. In addition, how to treat a drone that is sometimes flown for hobby purposes and sometimes for commercial purposes? One thing is for sure, this is not the last we will hear of this issue.