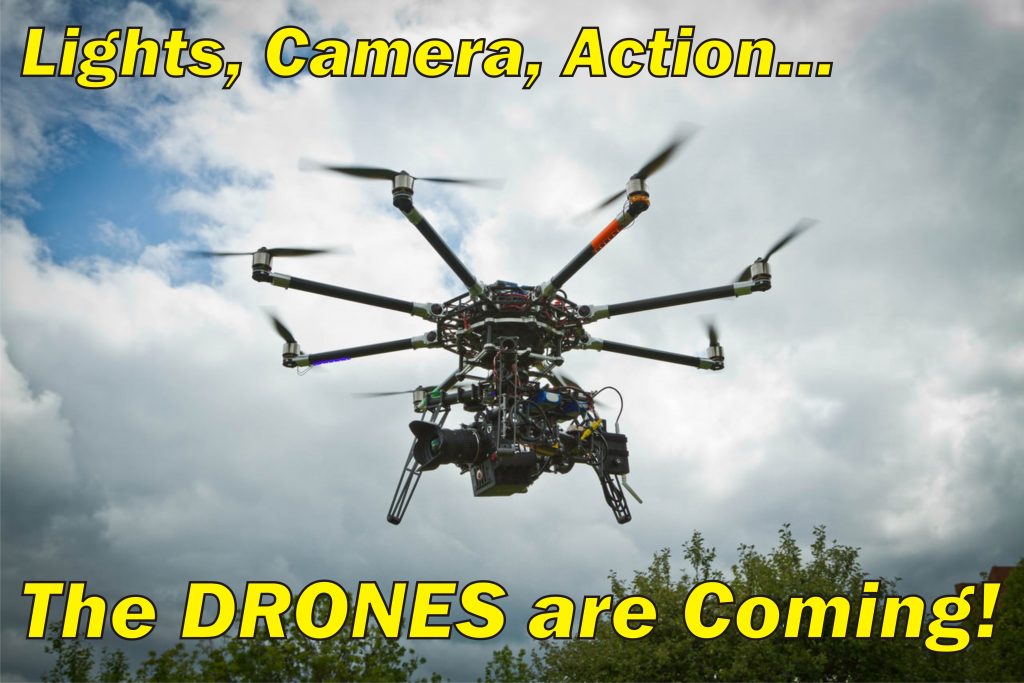 Hollywood has been all a-twitter this past week in the run-up to the annual Academy Awards presentation, and the winner of the Oscar for Best Picture was – for the aeronautically inclined – “Birdman.” But the big news in the corporate and commercial aviation field – and perhaps the bigger story in terms of its long-term potential to affect film-making – was the announcement by the Federal Aviation Administration (“FAA”) of proposed rules for the commercial operation of unmanned aerial systems (“UAS”) – or as they are more commonly known to the world – drones.

The Academy of Motion Arts and Sciences can nominate as many as ten films each year for the Best Picture Oscar and famed television late-night host David Letterman has his nightly “Top Ten List.” In that spirit, here is Aerlex’s Top Ten Takeaways from the FAA’s proposed rules for commercial operations:

The FAA unveiled the proposed rules on February 15th as part of a Notice of Proposed Rulemaking (“NPRM”) that will eventually lead to the adoption of a new Part 107 of the Federal Aviation Regulations (“FARs”). A copy of the proposed new rules can be found here. “We have tried to be flexible in writing these rules,” FAA Administrator Michael Huerta said. “We want to maintain today’s outstanding level of aviation safety without placing an undue regulatory burden on an emerging industry.”

Aerlex Law Group President Stephen Hofer said that, in providing more certainty and clarity regarding what drones will and will not be allowed to do in U.S. airspace, the FAA is giving the commercial UAS industry a significant boost. The FAA began approving exemptions for commercial drone use on a limited basis last summer, but has issued only 26 such authorizations thus far. However, FAA officials estimate that after the drone rules take effect, 7,000 businesses will get drone permits within three years.

The Association for Unmanned Aerial Systems International predicts that drones will create 100,000 new jobs and have an economic impact of $82 billion by 2025. In Southern California, drones are expected to have a significant impact in the fields of videography and video photography, potential goldmines for Hollywood’s entertainment industry. The proposed rules are also expected to make it easier for people in real estate, oil production, agriculture and law enforcement to fly small drones for work purposes as long as they have a permit.

The FAA’s proposed rules represent a retreat from the agency’s previous demand that drone operators must hold a private pilot’s certificate and a current third-class medical certificate. Now, the agency will require only that a prospective drone operator be at least 17 years old and pass a written test regarding “aeronautical knowledge.” No practical operational tests will be required. Upon successful completion of the written test and review by the TSA for security reasons, the applicant would be issued a UAS operator certificate. Thereafter, the test would have to be retaken every 24 months.

Although the proposed rules would prohibit flying drones over people – except for persons associated with the drone activity – the new rules do not restrict flights over houses or buildings unless the structures are located in controlled or restricted airspace. They must also remain clear of, and avoid, other aircraft, a sore point with the aviation industry, which already has reported several near misses between drones and other aircraft.

The requirement that the UAS must remain within the operator’s visual line-of-sight (“VLOS”) and must remain close enough for the operator to be capable of seeing the drone with vision unaided by any device other than corrective lenses will not sit well with on-line retailing giant Amazon, which has previously announced plans for Prime Air, a service that would use drones to deliver packages to customers in 30 minutes or less. Unless the VLOS requirement is modified during the comment and review period, the FAA’s proposed rules would not allow Amazon’s delivery scheme.

Although commercial drones are not supposed to be flown higher than 500 feet above the ground, the new rules would allow operators the opportunity to request special Air Traffic Control (“ATC”) clearance to fly drones as high as 18,000 feet. A camera –although not required – could be attached to the drone to allow for better flight observation by the operator. The rules would not permit drone operation at night and operators would not be permitted to operate more than one drone at a time.

The FAA would not require that airworthiness certification be issued for drones weighing less than 55 pounds, but the operator would have to inspect a drone before flight to verify that it is in safe operational condition. An operator would also have to assess existing weather conditions before commencing flight activity. Drones would have to be registered with the FAA, just like all other U.S.-registered airplanes and helicopters, and would have to display their registration numbers, just like all other aircraft.

Finally, the FAA made it clear that existing rules prohibiting “careless or reckless” operation of any aircraft, including drones, would continue to be vigorously enforced. Indeed, Aerlex attorneys note that the FAA has recently toughened its enforcement policies concerning drones and the proposed new rules are not expected to alter these policies. If anything, the FAA may increase efforts to crack down on unsanctioned operations once a formal system for regulating drone operations is in place.

The proposed rules will not take effect until 2017 at the earliest. After the rules are published in the Federal Register, a 60-day public comment period will begin, which will be followed by further review by other federal agencies. The FAA also plans on holding several public meetings on the new rules and has specifically requested comments on several issues. Among them is possible relaxation of the “line of sight” requirement, including suggestions for how far beyond direct observation a drone might go. The agency is also seeking public comment on the possible establishment of a separate category for “micro drones” that weigh less than 4.4 pounds. Micro drones could end up being exempted from most regulation.

Aerlex’s drone task force, including attorneys Stephen Hofer and Craig Weller and former FAA officer Bob Frost, are available to assist clients with drone issues, including the preparation of comments to the FAA during the upcoming public comment period.