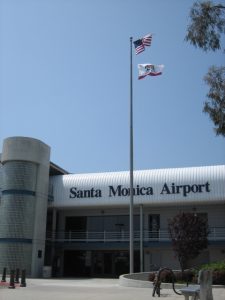 The Federal Aviation Administration (“FAA”) has ruled that Santa Monica Airport (“SMO”) must stay open until at least 2023.

The FAA issued its decision on December 4th in response to a complaint filed under Part 16 of the Federal Aviation Regulations (“FARs”), declaring that the City of Santa Monica (“City”) is bound by federal grant assurances to continue operating the airport through August 27, 2023.

The Part 16 complaint was originally filed in July 2014 by a coalition of aviation organizations and pro-SMO individuals, including the National Business Aviation Association (“NBAA“), the Aircraft Owners and Pilots Association (“AOPA“), airport businesses, airport tenant, pilot and motion picture actor Harrison Ford, and various other parties. The complaint asked the FAA to exercise its jurisdiction under FARs Part 16 to determine whether the $240,000 in federal Airport Improvement Program funds the City accepted on August 27, 2003 extended the City’s 20-year grant-based obligation through the August 2023 date.

The question of if and when the City’s obligations to operate the airport will terminate has been a point of contention between airport supporters and opponents for decades. Anti-airport activists within the City maintain that all commitments to the federal government expired when a 30-year agreement between the FAA and the City ended on June 29, 2014. In the 17 months since then, the City has refused to abide by applicable FARs and has shortened tenant leases, raised landing fees, and continued efforts on multiple fronts to implement its ultimate goal of closing SMO. The City has been supported in its actions by anti-airport congressional representatives Ted Lieu (D-Torrance) and Karen Bass (D-Los Angeles), both of whom have urged the FAA to allow the City to shut down the airport.

The City’s obligations to continue operating SMO stem from a 1948 post-World War II deed, which transferred control of the airport from the federal government back to the City with significant enhancements and upgrades made and paid for with federal funds during the war. In exchange for returning a vastly improved airport to the City, the 1948 deed required that SMO be maintained and operated as a public airport forever. This exchange was part of a nationwide program of deeds that returned improved aviation facilities to cities and local regions for post-war operation. Santa Monica has unsuccessfully challenged the 1948 deed in federal district court, and is currently pursuing an appeal. Aviation advocates have long argued that if the City were allowed to close SMO, it could start a snowball effect involving other municipalities that could cripple the national airport system.

The City has 30 days to appeal the FAA’s ruling on the Part 16 complaint. Any final ruling by the FAA can be appealed in federal court.