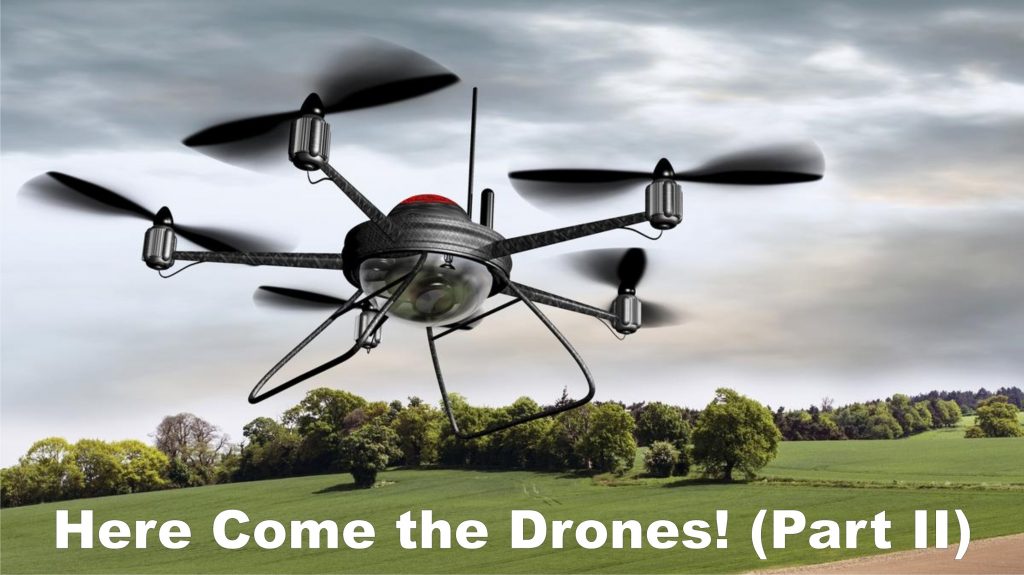 Aerlex’s senior regulatory counsel, Craig Weller, provides the following update on one of 2014’s hottest topics in aviation – drones. Craig reports that the FAA is moving forward with the rule-making process that will govern how unmanned aerial systems (UAS) are used in the nation’s skies while, at the same time, stepping up its enforcement actions against what it regards as unsafe drone use. Craig is a most appropriate author to be writing on this topic. A lawyer since 1977, Craig spent a decade with the U.S. Civil Aeronautics Board (CAB) and the Federal Aviation Administration (FAA) before going into private practice. He joined Aerlex in 2010 and has represented air carriers, pilots and others in National Transportation Safety Board (NTSB) accident investigations and FAA certificate revocation and enforcement proceedings. Craig Weller is actively monitoring drone developments for Aerlex and is ready to assist clients in matters involving UAS.

In our last eblast on the subject of drone operation in this country, we noted that the Federal Aviation Administration (FAA) was working at the instruction of Congress on adopting formal rules for the regulation of drones (or “unmanned aerial systems” (UAS) as they are known to the FAA) and was permitting limited use of drones by selected governmental/public agencies to gather experience with drone use in the national airspace. At the same time, the FAA also has authorized limited commercial use of drones by a group of film makers by invoking the FAA’s exemption authority. This limited authority allows these film makers to use commercially operated drones under tightly limited conditions in the film making business. The FAA is also evaluating similar requests for exemptions for other commercial drone use, including a request from Amazon to use drones for package delivery. The FAA has historically used its exemption authority to gather data and experience in advance of general rulemaking on a subject.

While this second eblast is once again titled “Here come the drones,” anyone who has been paying attention to the news media recently is aware that drones are already here and are a hot topic. Commentators in the technology sector have derided the FAA’s unwillingness to liberalize the use of drones, insisting it will stifle innovation. At the same time, the airline pilot community is reporting increasingly frequent encounters with drones in airspace where they should not be. The latest figures are 40 encounters a month with reported drones. At that frequency, it is not hard to envision that the next airliner “bird strike” could well be a “drone strike.”

While the FAA has not yet issued any rules on commercial drone operations, it has taken two actions that indicate it is serious about the increasing number of unauthorized drone operations in the national airspace. First, it has taken enforcement action against an unauthorized drone operator that allegedly operated a drone in a careless or reckless manner endangering the lives or property of other persons in violation of Section 91.13 of the Federal Aviation Regulations. The drone operator had been hired to make aerial photographs of the University of Virginia grounds. While doing so, he allegedly buzzed at least one pedestrian, flew the drone through a tunnel and flew the drone to an elevation of around 1,500 feet. Huerta v Pirker, NTSB Enforcement Action No. 157030. The FAA proposed a civil penalty of $10,000 for these violations. Pirker appealed on the grounds that his drone was not an “aircraft” subject to the FAA’s jurisdiction and a National Transportation Safety Board (NTSB) Administrative Law Judge (ALJ) agreed. However, on appeal by the FAA, the NTSB reversed the ALJ’s finding and determined that, in fact, Pirker’s drone was an aircraft subject to FAA jurisdiction. The Board remanded the case to the ALJ to determine if Pirker’s operation of the drone was, in fact, careless or reckless. If the FAA proves its allegations about Pirker’s operation of the drone, it is quite likely the ALJ will uphold the FAA’s sanctions. With this NTSB ruling in its favor, the FAA now seems to have a “green light” to commence enforcement actions against other unauthorized drone operators.

In another significant step in the FAA drone enforcement efforts, on October 10, 2014, the FAA issued new national policy guidance regarding drone enforcement cases. Among the changes were a new requirement for coordination with the Aviation Flight Standards office at FAA National Headquarters and the appropriate Regional Counsel’s office before a local inspector decides whether administrative or legal enforcement action is appropriate. In most cases, this decision is usually made at the local flight standards district office (FSDO) level. Second, the FAA said that, in proceeding with cases involving unauthorized drone use for commercial purposes, it might cite violations of certification rules (pilot and aircraft) as well as any violations of operational rules. Finally, the FAA indicated that in egregious cases involving drone use by certificated airmen, it might initiate action against the pilot’s certificate in addition to any civil penalty action for the same violations.

What do these recent NTSB and FAA actions mean? We think it means that the FAA is now getting serious about going after improper or unauthorized drone use. For that reason, anyone contemplating drone use, especially for commercial purposes, should seek experienced legal counsel to advise them before proceeding. Aerlex attorneys are familiar with both the existing legal restrictions on drone use and the FAA exemption process that is being used to provide authorization for drone use. In our experience, it is less stressful and cheaper to learn the rules and obtain any needed permission than to fight an FAA enforcement action. As far as the FAA is concerned, not knowing the rules is no excuse.