The first and last men to walk on the moon and a pilot-turned-Hollywood producer were among the aviation luminaries honored when the tenth annual Living Legends of Aviation awards ceremony was held on January 18, 2013 in Beverly Hills, California.  Famed airshow and test pilot R. A. “Bob” Hoover lauded the historic accomplishments of his friends and Apollo astronauts, the late Neil Armstrong and Gene Cernan, while aerobatic pilot, actor and producer David Ellison was recognized for his efforts to inspire young pilots.

Neil Armstrong, commander of the Apollo 11 lunar landing mission and personal friend of Bob Hoover, died in August of last year, but he had already agreed to accept Bob Hoover’s esteemed Freedom of Flight Award and   would have attended the ceremony had he lived.  The award was presented   posthumously to Armstrong’s widow, Carol, and his two sons, Eric and Mark.  Armstrong was remembered not only as the first man to set foot on   the moon, but also as an accomplished test pilot, a naval aviator who flew   combat missions in the Korean War and an aerospace engineer.  Cernan,   commander of the Apollo 17 mission and the 12th and last man to walk on the moon, told the audience that he and Armstrong had achieved their fame by standing on the shoulders of thousands of others who had helped them realize their dreams.  Cernan challenged the audience to provide the same sorts of opportunities to future generations and help them reach for the stars.

The youngest honoree at this year’s Legends event was David Ellison, who received the Aviation Inspiration and Patriotism Award.  Ellison is both an accomplished pilot with commercial multi-engine instrument and helicopter ratings and a highly respected Hollywood producer. In 2003, he was the youngest member of “The Stars of Tomorrow” that flew at the EAA’s Aerobatic AirVenture Show in Oshkosh, Wisconsin, and he both starred and flew in the 2006 motion picture, “Flyboys,” the story of American pilots in World War I.  Tony Bill, the aviation aficionado who directed   “Flyboys,” presented Ellison with his award at this year’s Legends ceremony.  Ellison’s Skydance Productions has produced, among others, the Coen Brothers’ remake of “True Grit,” nominated for 10 Academy Awards in 2010, and “Mission Impossible Ghost Protocol” in 2011.  His company’s   most recent efforts include “Jack Reacher” starring Tom Cruise and the   soon-to-be-released “World War Z” starring Brad Pitt.  Ellison, named to Forbes magazine’s “30 Under 30” list in 2011, is a long-time friend of the Aerlex Law Group.

Bob Hoover, also a long-time friend of the Aerlex Law Group, has been presenting his Freedom of Flight Award at the Legends program since 2007.  Neil Armstrong and Gene Cernan joined a celebrated list of past honorees, including the Doolittle Raiders, Burt Rutan, the late Senator George McGovern, Congressman Sam Johnson, Kermit Weeks, Forrest Bird, Zoe Dell Lantis Nutter and Emily Howell-Warner, all admired figures in the world of aviation.

Famed motion picture actor and versatile pilot Harrison Ford, still another long-time friend of the Aerlex Law Group, presented his fourth annual Harrison Ford Aviation Legacy Award to Greg Anderson, president and chief executive officer of the Wings Over the Rockies Air and Space Museum in Denver, Colorado, and the creator of the EAA’s “Young Eagles” program.  Harrison Ford and Bob Hoover are pictured above with Aerlex President Stephen Hofer at the after party.

Other honorees this year recognized at this year’s Legends ceremony included Aspen Avionics CEO John Uczekaj, who was named Aviation Entrepreneur of the Year; former Boeing President and CEO James Albaugh, winner of the Lifetime Aviation Industry Leader award; David Neeleman, founder of JetBlue Airways and Brazil’s Azul, recognized as the Lifetime Aviation Entrepreneur; and Roy Morgan, winner of the Vertical Flight Hall of Fame award as the founder of Air Methods, largest provider of helicopter air medical transport services in the country.

Marking its tenth anniversary this year, the annual Living Legends of Aviation ceremony has become one of the most prestigious and exclusive events in the world of aviation and attracts hundreds to the black-tie fête.  Famous figures from both Hollywood and the aviation industry fill the main ballroom of the Beverly Hilton Hotel and make the Legends a star-studded event. The Legends raises money to support the work of the nonprofit Kiddie Hawk Air Academy, an educational program that seeks to inspire the pilots of tomorrow by offering youngsters a hands-on opportunity to learn how airplanes work in flight simulators brought into elementary school classrooms and air shows around the country. 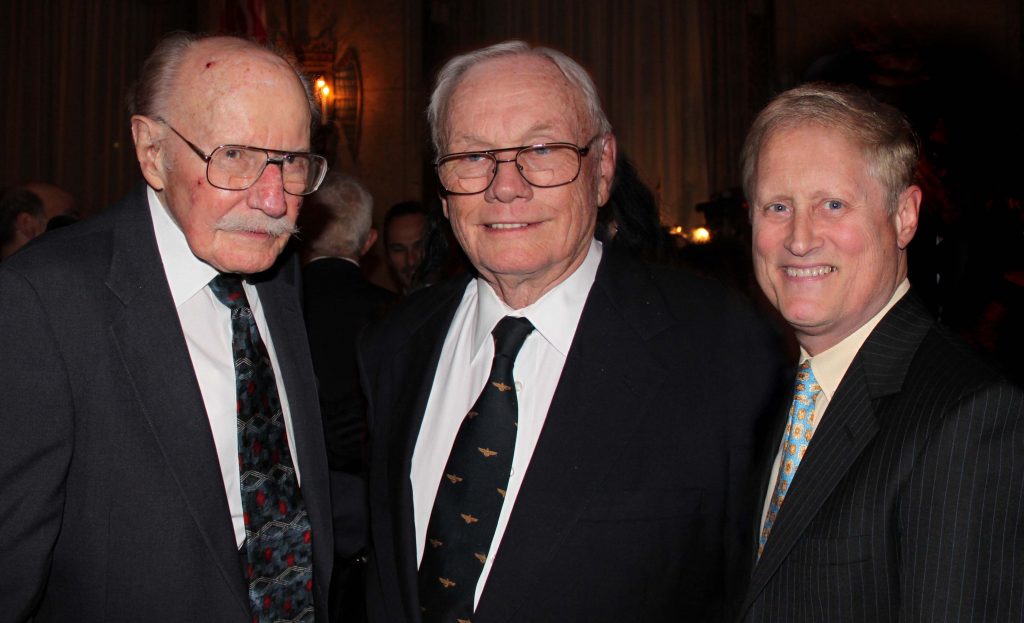 One of the last opportunities that Bob Hoover and Neil Armstrong had to see each other before Mr. Armstrong’s untimely death was on February 4, 2010 when the Aero Club of Southern California presented Bob Hoover with the Howard Hughes Memorial Award.  Aerlex Law Group President Stephen Hofer attended the ceremony and Mr. Hoover introduced him afterward to the first man to step foot on the moon.