The last two surviving Doolittle Raiders – Dick Cole and David Thatcher – and Gail Halvorsen, the famed “Candy Bomber” of the 1948 Berlin Airlift, were among the history-making pilots honored at the 13th annual Living Legends of Aviation awards ceremony held January 22nd at the Beverly Hilton Hotel in Beverly Hills, California. 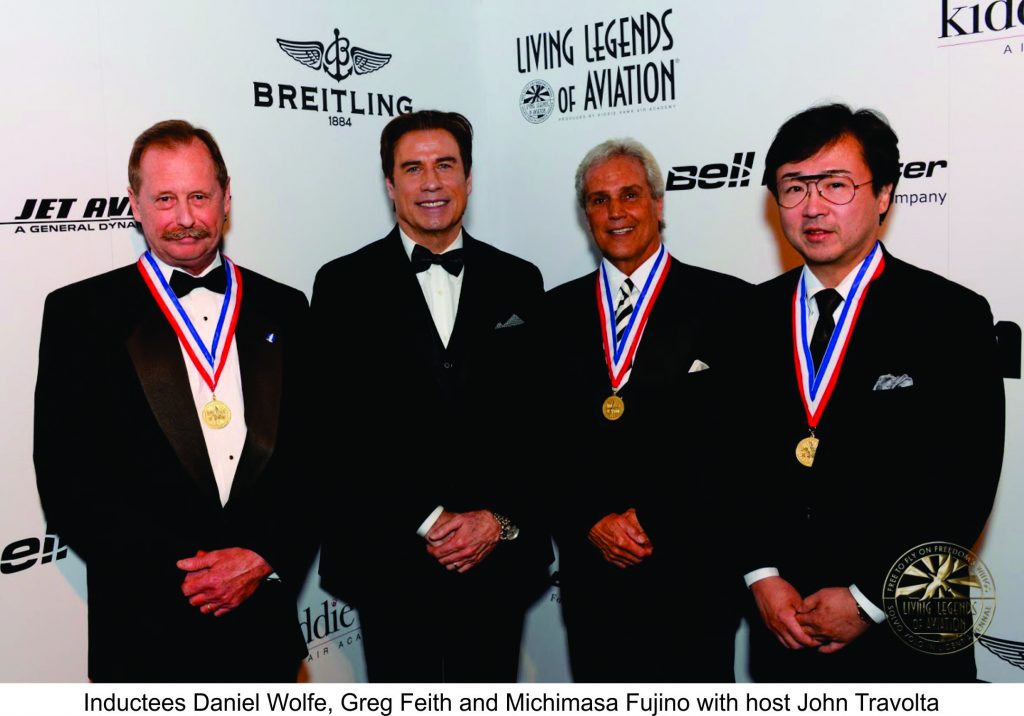 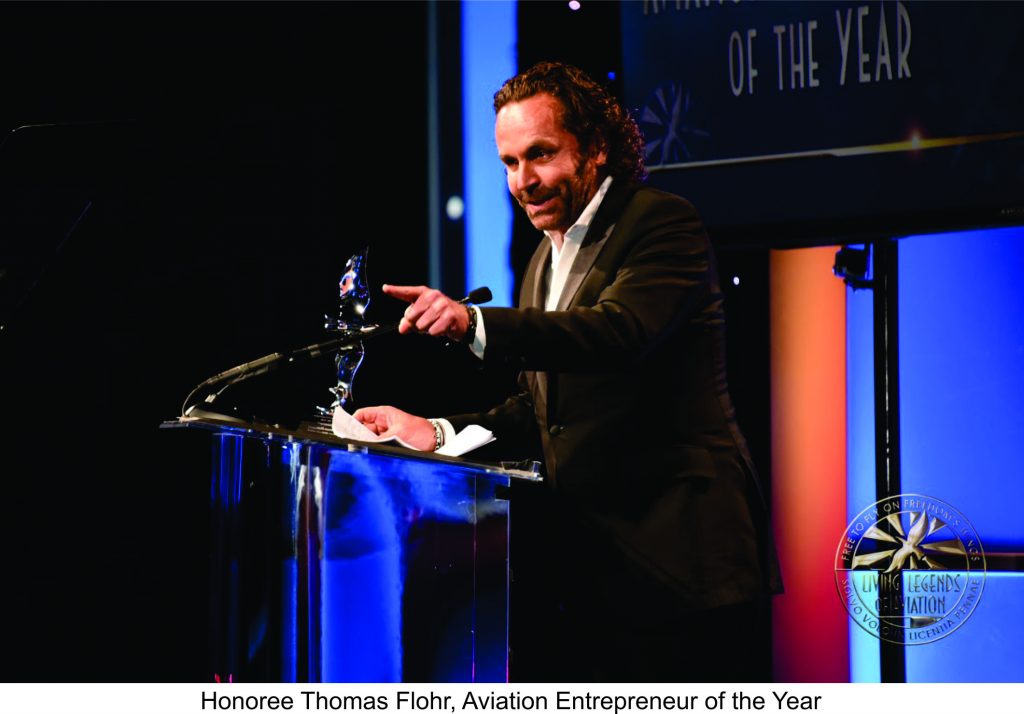 Continuing an annual tradition, motion picture actor and accomplished pilot John Travolta, the “Official Ambassador of Aviation,” served as host for the Legends ceremony and welcomed more than 1,000 guests in the Hilton ballroom before turning the festivities over to the evening’s emcees, air show announcer Danny Clisham and, new this year, television journalist Tom Costello. Chief aviation correspondent for NBC News since 2005, Costello was an apt choice to present the Aviation Inspiration and Patriotism Award to his fellow television journalist, Miles O’Brien, who lost his left arm above the elbow in 2014, but continues to fly and report on aviation matters for CNN and PBS.

Fresh from his starring turn in “Star Wars: The Force Awakens,” Living Legend Harrison Ford was once again on hand to present the Aviation Legacy award that bears his name to Scott Terry, CEO of Tempus Applied Solutions and founder of Global Flight Relief, a charity that provides aviation assets to assist in disaster relief and aeromedical evacuation missions. 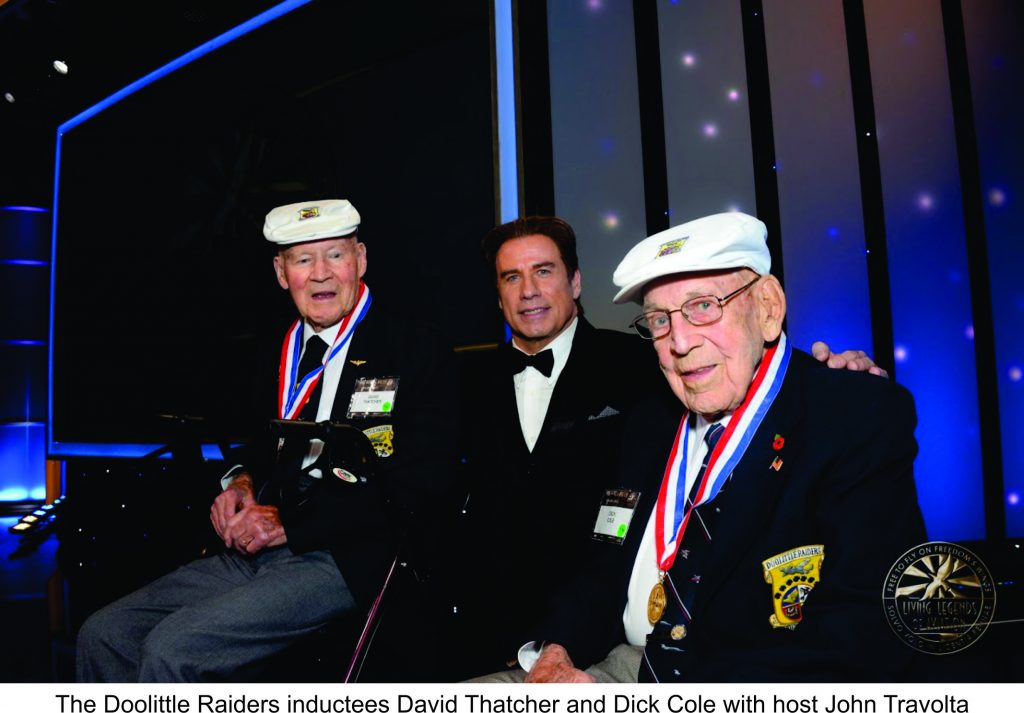 Legends inductees Lt. Col. Richard “Dick” Cole, who is now 100 years old, and 93-year-old gunner Staff Sergeant David Thatcher are the last two surviving members of the legendary Doolittle Raiders, the courageous group of 80 volunteers led by Lt. Col. “Jimmy” Doolittle who flew 16 B-25 bombers on a perilous bombing mission over Tokyo on April 18, 1942. The Doolittle Raid was the first American air strike on Japan in the Second World War, revealing that nation’s vulnerability to American air raids and shocking the Japanese civilian population who had thought their island homeland invincible. Coming just 4½ months after the Japanese surprise attack on Pearl Harbor, the Tokyo bombing raid also gave a much-needed boost to American morale which had been badly battered by a string of initial Japanese successes in the war.

Another pilot from that era, Colonel Gail Halvorsen, was honored with the Kiddie Hawk Children’s Award for his brilliant decision to begin dropping candy via parachute to German children trapped behind the Iron Curtain when the Soviets cut off Allied access to Berlin in 1948. The American and British airlifts provided essential food and fuel to the people of West Berlin for 11 months until the Russians finally abandoned the blockade in 1949. Halvorsen became known as the “Berlin Candy Bomber” and “Uncle Wiggly Wings” because he would wiggle the wings of his C54 transport plane to alert children that the candy was coming.

Living Legend inductee Michimasa Fujino, founding president and CEO of the Honda Aircraft Company, is the engineering wizard behind the technology and design innovations of the breakthrough HondaJet. The Federal Aviation Administration (FAA) issued final type certification for the HondaJet in December of last year, and the company delivered its first completed aircraft just two weeks later. 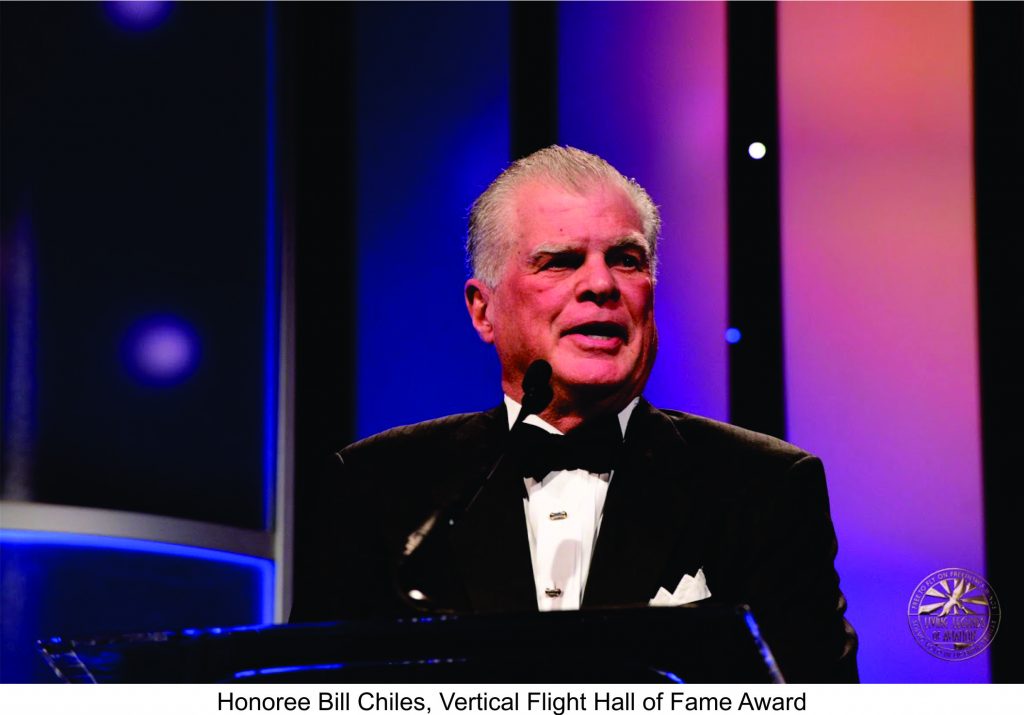 Greg Feith, former National Transportation Safety Board (NTSB) Senior Air Safety Investigator, has dedicated his career to aviation safety during his 36 years in the industry, has investigated more than 2500 aircraft accidents worldwide and has won numerous NTSB and aviation industry awards for his contributions in the field of accident investigation. Feith currently lectures and consults on aviation safety and serves as an Aviation Safety Analyst for NBC News. He was a key member of the NBC News team that covered the crash of Malaysia Airlines flight 17, which was shot down in July 2014 over the Ukraine.

Daniel Wolfe has been Chief Pilot and Flight Department Director of Nationwide Insurance for more than 25 years. A pilot with more than 14,000 hours in the air, Wolfe is a founding member of the Business Aviation Collaborative of Ohio (BACO) where he has helped promote the development of aviation courses at many of the state’s colleges and universities. 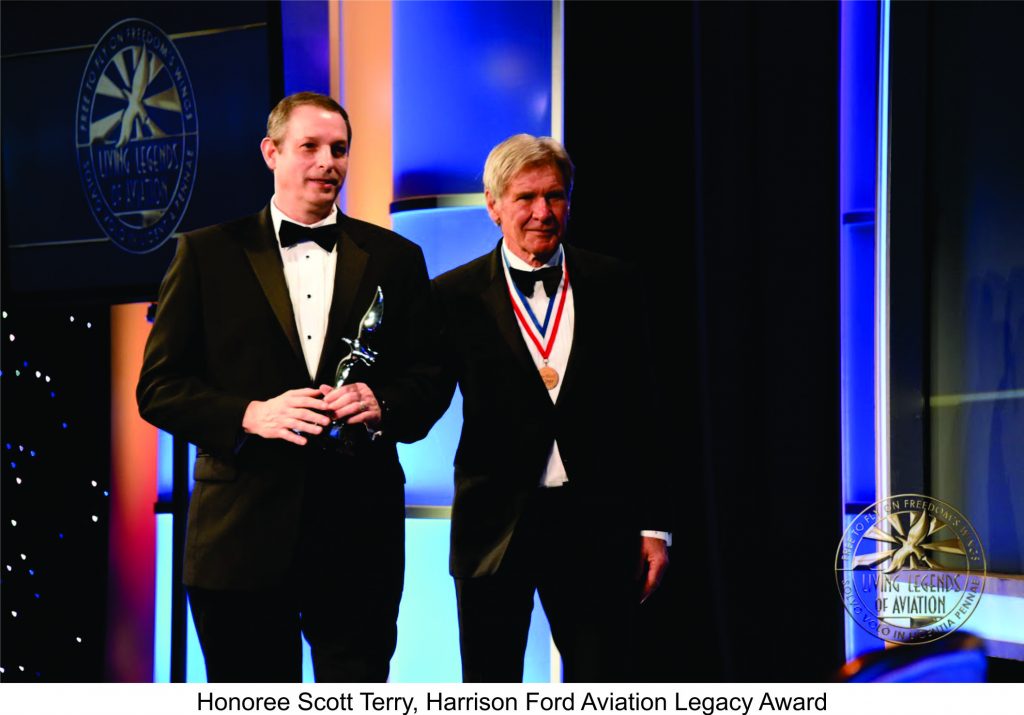 The final award of the evening is traditionally presented by Living Legend Bob Hoover, the celebrated “Pilots’ Pilot,” who has bestowed his Freedom of Flight Award upon some top aviators including astronauts Neal Armstrong and Gene Cernan and pilot, doctor and inventor Forrest M. Bird. However, this year the final segment of the show provided a special opportunity to honor Hoover, the 94-year-old former test pilot and fighter pilot, and the man who transformed modern aerobatic flying. With his vast flight experience, Hoover’s insight and advice have helped save countless pilots who found themselves in critical situations. Harrison Ford told to the audience that Hoover’s well-known recommendation of “flying as far as you can into the crash” helped him navigate a safe landing last March when his Ryan ST3KR experienced engine failure. Mark and Eric Armstrong, sons of Hoover’s good friend and the first man to set foot on the moon, the late Neal Armstrong, joined Hoover on stage as Ford led the audience in a toast to honor the man known as one of the greatest pilots who has ever lived. 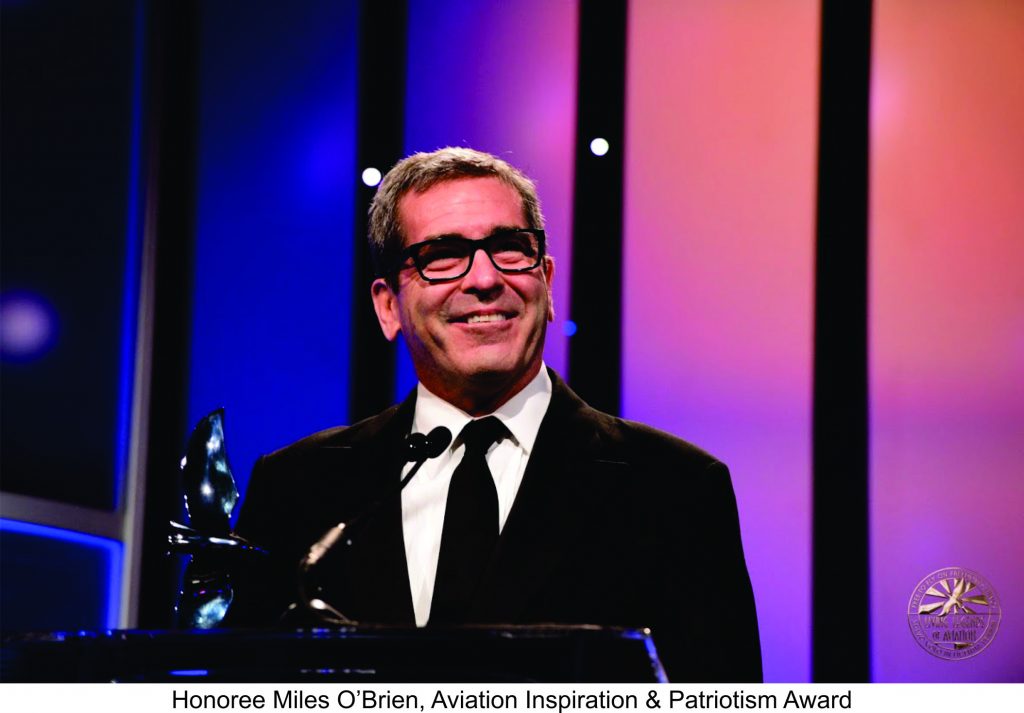 The annual Living Legends of Aviation ceremony has become one of the most prestigious and exclusive events in the world of aviation. Famous figures from both Hollywood and the aviation industry fill the Beverly Hilton ballroom and make the Legends a star-studded event. The Legends raises money to support the work of the nonprofit Kiddie Hawk Air Academy, an educational program that seeks to inspire the pilots of tomorrow.