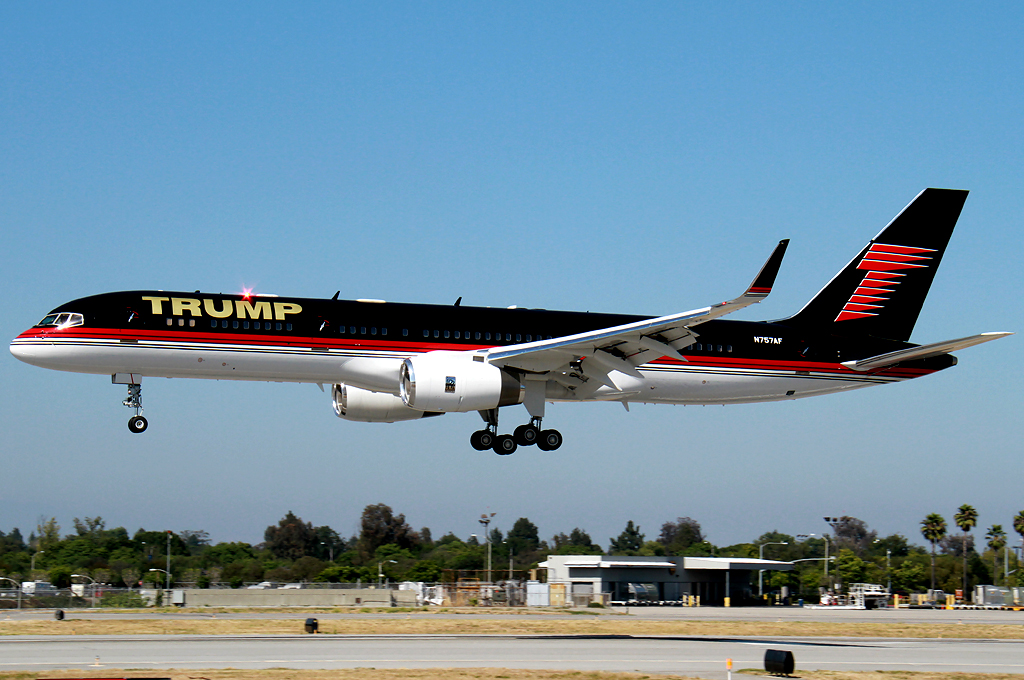 Donald Trump, the celebrity tycoon and real estate magnate who is running for the 2016 Republican presidential nomination and has surged to the lead in recent popularity polls, is also famed for his use of private aviation to support, not only his political candidacy, but every aspect of his business and personal life. Much attention is being given to Trump’s use of his own Boeing 757-200, now nicknamed “Trump Force One,” in his run for the White House. Trump bought the Boeing 757-200 in 2011 with the assistance of the Aerlex Law Group and was so happy with the firm’s support that he later volunteered to write a letter of endorsement for the firm’s website. The letter he penned reads:

“The Trump Organization only works with the best of the best. When we asked industry experts for a recommendation on aviation counsel, the clear choice was the Aerlex Law Group of Santa Monica, California. They are experts in their field and working with them was a pleasure. That’s my kind of win-win.”

Stephen Hofer, President of the Aerlex Law Group, who has represented dozens of Hollywood celebrities over the past 20 years and has himself been described in the Los Angeles Daily Journal as the “Aviation Attorney to the Stars,” said that Trump was continuously and directly engaged in every aspect of the aircraft acquisition.

“The requirements of attorney-client confidentiality require that I not reveal any of the particulars of the transaction, but I can say this: Compared to many of our Hollywood clients, who prefer to have their business managers or entertainment lawyers work with us on their aircraft acquisitions, Donald Trump was very hands-on,” Hofer said. “Mr. Trump made it crystal clear, from the very first day and in all of our telephone conversations, that he intended to be involved in a direct way with every major issue in the purchase of the aircraft.”

Aerlex’s since-retired senior counsel, Marvin Murray, was born in the Bronx and he quickly established a rapport with Trump through their shared New York City roots. Given the three-hour time difference between New York and California, Mr. Murray said he got used to receiving cellular telephone calls from his client early every morning while he was walking his dog along Sunset Boulevard. Trump would pepper the lawyer with questions and offer him recommendations regarding negotiating strategies while he was being pulled along on the leash behind his pet.

Trump was buying the 757-200 from Paul Allen, the co-founder of Microsoft, aviation aficionado and owner of the Seattle Seahawks and Portland Trail Blazers professional sports teams, and Hofer said it was evident that Trump relished the opportunity to engage in a spirited negotiation with another one of America’s wealthiest and best-known business executives over the terms of the deal.

Hofer said that as soon as Trump closed the purchase of the 757-200 in 2011, he grounded it for an extended and expensive renovation that was intended to put Trump’s own unmistakable mark on the jetliner. Indeed, the aircraft has its own YouTube video [click here to view] hosted by Amanda Miller, one of the employees featured in Trump’s long-running television series, “The Apprentice.”

Although the 757-200 can seat 239 passengers in airline configuration, Trump’s plane is now configured for only 43. It has all the features one would expect to find on a private jet owned by Donald Trump, including a silk-lined master bedroom equipped with a big-screen entertainment system, a master bath with 24-karat gold fixtures and a shower. Indeed, virtually every fixture on the plane is 24-karat gold plated, down to the seat belts. The plane’s head rests and pillows are embroidered with the Trump crest.

Guests also travel in “Trump Style.” There’s a private guest room with another entertainment system. Each of the 43 seats has its own personal entertainment system and all can be converted into beds for sleeping. And for community entertaining, there’s a main lounge with a 57-inch screen and a library of over 1,000 motion pictures as well as access to the adjacent dining room and galley for fine dining.

Before he purchased the 757-200, Trump had owned a Boeing 727 and Aerlex also assisted the client with the sale of that aircraft as well.

Because Trump’s endorsement of Aerlex’s services is featured on the law firm’s website, several clients and friends have asked Hofer whether he is endorsing Trump’s controversial candidacy, but Aerlex’s president says he is maintaining strict neutrality for now. “We’re all about client service, not politics. That being said, Aerlex would be happy to assist any of the 15 other Republican presidential candidates if they’re interested in buying their own private jets or even if they’re just looking for fractional aircraft interests, jet cards or charter contracts,” Hofer says with a hint of a smile. “For that matter, Aerlex is ready to assist Democratic candidates Hillary Clinton or Bernie Sanders in meeting their private aviation needs – although I understand that the Socialist Senator from Vermont is still flying around in economy class on Delta!”