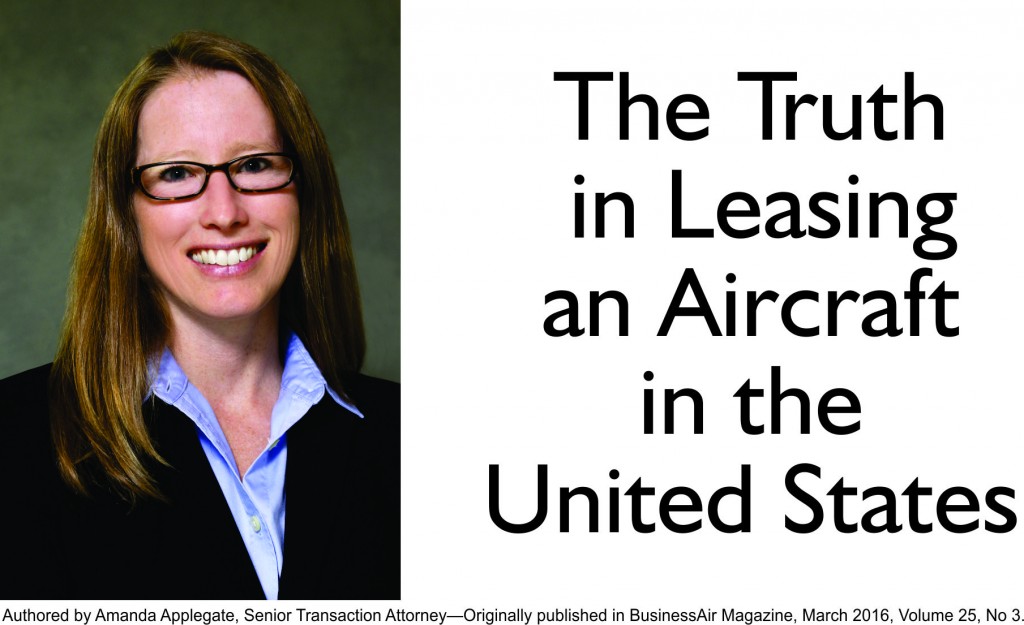 The Truth in Leasing an Aircraft in the United States — Originally published in BusinessAir Magazine, March 2016, Volume 26, No. 3.

One of the most common questions asked by aircraft owners is how to receive compensation when others want to use their aircraft from time to time. Under the Federal Aviation Regulations (“FARs”), private parties who do not hold air carrier certificates are not permitted to receive compensation for flights flown on their aircraft except under certain exemptions that are specifically listed in the regulations. Some of the exemptions under Section 91.501 of the FARs include joint ownership, intracompany flights, timeshare, co-ownership and hours interchange. These exemptions are specific, narrowly drawn and, in some instances, don’t allow the owner to receive full compensation for the use of the aircraft.

Because of the limitations in compensation under 91.501, many owners elect to enter into written dry lease agreements. The term “dry lease” refers to the lease of an aircraft without a crew. Dry lease agreements shift operational control (“OC”) of the aircraft to the lessee, and the lessee then pays for all costs associated with the use of the aircraft. A dry lease flight can be flown under Part 91 of the FARs which does not impose the same safety standards as Part 135, the portion of the regulations that applies to on-demand air charter operators. Additionally, under a dry lease, liability for the payment of Federal Excise Tax (“FET”) does not apply.

On February 10, 2016, a new advisory circular (“AC”) was issued by the Federal Aviation Administration (“FAA”) which cancels the previous AC, published in 1978. The new AC attempts to make sure parties to an aircraft lease understand and agree on who has OC of the aircraft. It also includes specifics on the problems that can result if OC is not clearly understood, including illegal chartering. The AC also warns that some groups may knowingly enter into evasively worded arrangements if the price is made attractively low, and those who are tempted to accept these terms may forgo the protection of certain safety standards and may also violate the law.

Under the AC, in order to determine if OC under the lease is with the lessor or lessee (which in turn determines whether the aircraft can be flown under Part 91 or Part 135) the following questions can clarify who will maintain OC:

1.
Who makes the decision to assign crewmembers and aircraft, accept flight requests, and initiates, conducts and terminates flights?
2.
For whom do the pilots work as direct employees or agents?
3.
Who is maintaining the aircraft and where is it maintained?
4.
Prior to departure, who ensures that the flight, aircraft and crew comply with regulations?
5.
Who decides when/where maintenance is accomplished, and who directly pays for the maintenance?
6.
Who determines weather/fuel requirements, and who directly pays for the fuel?
7.
Who directly pays for the airport fees, parking/hangar costs, food service and/or rental cars?

If the lessor is responsible for any of the criteria listed above, then the lessor has some OC and should clarify the leasing arrangements accordingly. If this situation is not properly clarified, the lessor could be held accountable for violations of the FARs for operation of the aircraft. The AC suggests that if there is any doubt about the legitimacy or operating authority concerning the flights, the determination can be made by the nearest FAA Flight Standards District Office (“FSDO”). If requested, the FAA will determine whether the lessor or lessee has operational control by reviewing the lease and other circumstances regarding actual use.

The AC also supports the continuation of the following practices related to dry leases:

1.
A copy of the lease or contract of conditional sale must be filed or mailed to the FAA Aircraft Registration branch within 24 hours of its execution for filing for truth-in-leasing purposes only.
2.
The lessee must provide notification to the local FSDO nearest to the airport where the lease or contract flight will originate at least 48 hours prior to the first flight of the aircraft under that lease.
3.
The dry lease must include a truth-in-leasing clause immediately before the signature of the parties, and the AC provides the text that should be used for that clause.